Tigran Balayan: Armenia has reaffirmed its commitment to democracy 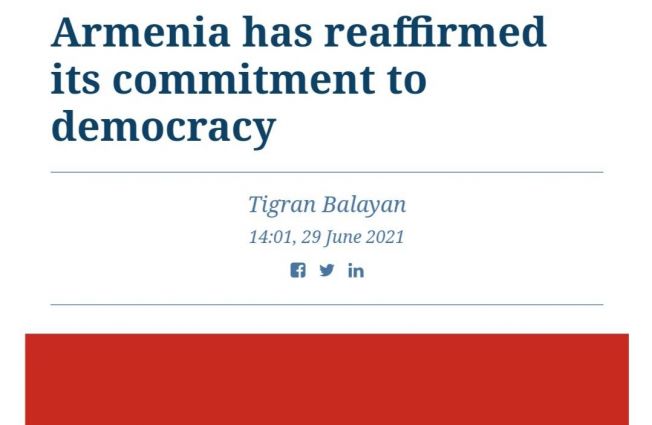 Early parliamentary elections were held in Armenia on 20 June 2021. The international observers from the OSCE/ODIHR, OSCE PA and PACE as well as parliamentarians have assessed the election positively. This demonstrates the viability of democracy in Armenia and the strong adherence to democratic values ​​in the country. The observers noted that the elections were competitive and well-run. Voters were provided with a wide range of options and fundamental rights and freedoms were respected. The voting process was characterized as competitive, flexible, transparent and well organized.

The elections were held at a very difficult time for Armenia, when the security of the region was once again challenged by the dictators of Azerbaijan and Turkey. Following the bellicose rhetoric of the Azerbaijani authorities, in May 2021 the Azerbaijani armed forces infiltrated the sovereign territory of Armenia and continue their provocation in a number of directions to this day. Despite appeals from the international community, Azerbaijan refuses to withdraw its armed forces from Armenia, further escalating the current situation and harming regional security and stability.

Remarkably, on the one hand, Azerbaijan is doing its best to hide its image as an aggressor by hosting F1 and the European Football Championship and sending messages of so-called reconciliation based purely on conditions. On the other hand, the hate policy is continued, which is reflected in the speeches of the Azerbaijani dictator that openly refer to the use of force to achieve his political goals.

With another example of the Aliyev regime blatantly violating its obligations, the RVE's Parliamentary Assembly released a report on political prisoners in the country, the title of which speaks for itself: The problem of political prisoners in Azerbaijan, " neither acknowledged nor adequate addressed, let alone resolved. Despite this, the EU is still considering inviting Aliyev to the Eastern Partnership Summit.

Some EU foreign ministers refer to Azerbaijan as a strategic partner, while silent on the fact that Azerbaijan as a country is notorious for its lack of rule of law and independence of the judiciary, as well as the existence of corrupt courts, torture and abuse of the penitentiary system , the fabrication of criminal proceedings against the regime's critics, the recent aggression that identified numerous war crimes and the recently launched mock trials of Armenian prisoners of war, which are also in violation of international humanitarian law. And, of course, the infamous "judges" are the ones who have spent decades silencing and condemning the regime's critics.

Against the backdrop of a democratic deficit and state-sponsored poorophobia, Azerbaijan continues to hold Armenian prisoners of war as a bargaining chip. Under the watchful eye of UNESCO and other international players, Azerbaijan continues the systematic destruction of the ancient cultural heritage of the forcibly displaced indigenous Armenian population of Artsakh, further proving that Azerbaijan's cultural vandalism is based on hatred of the Armenian people.

It is noteworthy that, while most European governments were hesitant to take action independently of statements addressed to both sides, both during the war of 2020 and in the post-war period, Azerbaijan is not only continuing its deplorable behavior but also expanding it.

When the Dutch parliament recently passed a motion calling on the government to put pressure on Azerbaijan to release Armenian prisoners of war, the Azerbaijani parliament asked its government to take measures against the House of Representatives because of its 'anti-Azerbaijani position'. In this way Baku threatens and blackmails the most important democratic institution in the Netherlands.

This clearly shows that rather than neutral statements on both sides, more concrete steps are needed. Those responsible for the countless war crimes and other blatant violations of international law must be held accountable. According to the motions of the House of Representatives, the government should be more decisive and introduce sanctions against Azerbaijani officials.

Finally, it is important to recognize that on June 20, 2020, the Armenian people took another major step and demonstrated once again that democracy in Armenia is irreversible. Now it is Europe's turn to give a voice to protecting our common values ​​and to take practical steps in that direction.