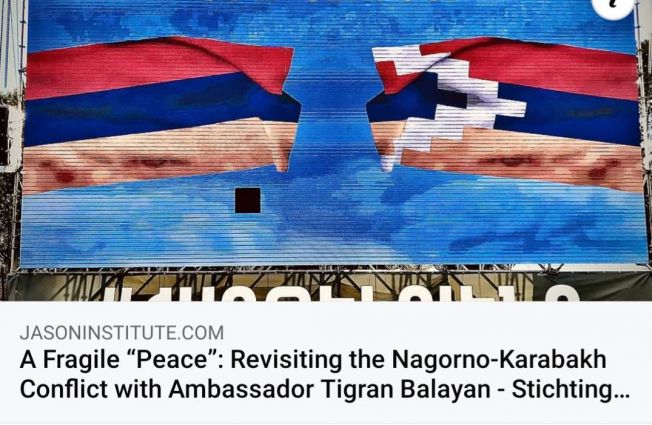 In December of last year, JASON Magazine interviewed Mr. Tigran Balayan, the Armenian ambassador to the Netherlands. The conflict in Nagorno-Karabakh escalated into a hot war at the end of 2020 and resulted in the loss of significant territory for Armenia and the largely unrecognised Republic of Artsakh. A ceasefire agreement on November 10 brought an end to the immediate violence, though border skirmishes and violence continued to occur [1] well into 2021.

There continues to be a significant presence of Russian peacekeepers across the border to maintain the fragile peace that was brokered in 2021. Though analysts consider the current ceasefire to be largely successful in preventing a new round of widespread violence [2], many dangers continue to lurk beneath the surface.

The most obvious source of continued tension and instability is that the Nagorno-Karabakh conflict itself has by no means been solved, and Armenia and Azerbaijan continue to be on polar opposites with little hope for a sustainable solution. Politically, the aftermath of the loss of Armenian territory continues to divide Armenia at home, with prime-minister Nikol Pashinyan winning a hotly contested election [3] only two weeks ago.

Mr. Tigran Balayan, who has served as the Armenian ambassador to the Netherlands since 2018, has warned on several occasions for instability of the current ceasefire agreement, describing the current situation as “fragile” and “unstable” [4]. Balayan cited the difficulties concerning the exchange of Armenian prisoners of war and the planning of the Zangezur corridor [5], which would see Azerbaijan connect with its exclave of Nakhichevan and would cross Armenian territory as some examples.

The ambassador’s warning for renewed hostilities, and his fear for another full-scale war in Nagorno-Karabakh was the reason for JASON Magazine to speak once again with Mr. Balayan. We asked him to elaborate on his projections for the future and his views on the current situation, but also his solutions for a more sustainable solution of the conflict, which mirrors the Armenian case for self-determination for the Republic of Artsakh.

Make sure to watch the interview below!