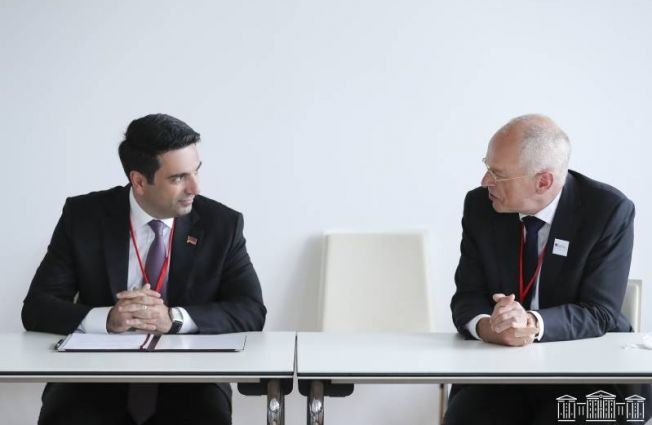 He reminded that the first meeting of Armenia-Netherlands friendship framework was also held during that visit, the Co-chairs of which were he and the Member of the Committee on Foreign Relations of the House of Representatives of the Kingdom of the Netherlands Joël Voordewind. The NA President has stated that despite the difficulties caused by COVID-19, the friendly relations between our states and parliaments develop quite harmoniously, and our states are going to carry out more in-depth and targeted cooperation.

The vivid proof of it is also the opening of the Embassy of the Kingdom of the Netherlands in Yerevan in September 2020. Alen Simonyan reaffirmed the readiness to deepen the Armenian-Dutch inter-parliamentary cooperation. The NA President has singled out particularly three challenges, in which the RA expects political support from our colleagues – the establishment of peace in our region, the solution of the problem of Armenian prisoners of war, taking into account that Azerbaijan has turned it into a political bargain and the effective implementation of Armenia-European Union Comprehensive and Enhanced Partnership Agreement. He has emphasized that the destructive position of the Azerbaijani delegations at different parliamentary assemblies and the behaviour of the delegates supporting them for the benefit remains disputable for the Armenian side. Alen Simonyan thanked the colleagues of the Parliament of the Netherlands for about 17 resolutions condemning the war unleashed by Azerbaijan against Artsakh in autumn 2020 and its consequences.

During the discussion, the President of National Assembly has considered the fake trials carried out against the Armenian prisoners of war and other detainees unacceptable, and contradicting to the international law. Alen Simonyan has reaffirmed that Armenia takes interest in the peaceful settlement of the Nagorno Karabakh conflict, in the frameworks of the format of the Co-chairs of the OSCE Minsk Group.

According to him, the priority of human rights is very important in any situation, also highlighting the Armenia-EU cooperation in this context. At the end of the meeting, Jan Anthonie Bruijn reaffirmed the readiness to support the activities of the Co-chairs of the OSCE Minsk Group in the region. The President of the National Assembly of Armenia invited his counterpart to pay an official visit to Armenia.