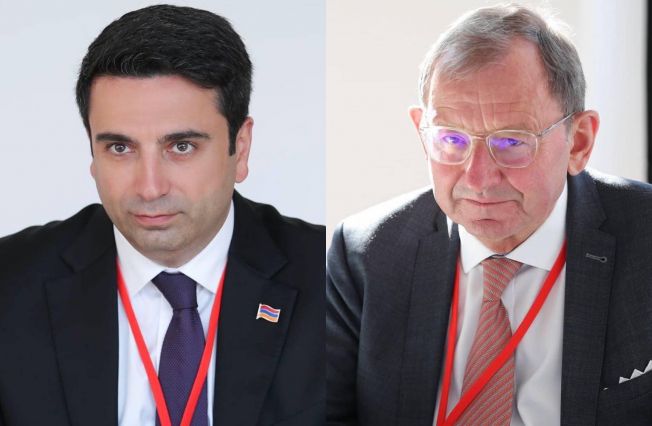 On September 8, within the framework of the Fifth World Conference of Speakers of Parliaments held in Vienna, the President of the National Assembly of Armenia Alen Simonyan met with the President of the Chamber of Deputies of Grand Duchess of Luxembourg Fernand Etgen.

Both sides have highlighted the continuity of the political dialogue at the meeting, one of its motivating factors is also the parliamentary diplomacy. Alen Simonyan has noted that he highly appreciates the balanced and impartial position of Luxembourg on the issue of the Nagorno Karabakh conflict, expressing gratitude on the adoption of resolutions by the Chamber of Deputies of Grand Duchess of Luxembourg on October 16, 2020 and on December 24, 2020 condemning the military actions unleashed by Azerbaijan against Artsakh and emphasizing the importance of the final status of Nagorno Karabakh.

During the talk, the President of  National Assembly of Armenia has stated that it is also necessary to boost the inter-parliamentary cooperation on the international parliamentary platforms. The President of the Chamber of Deputies of Grand Duchess of Luxembourg expressed his support for the processes directed to the development of democratic values in Armenia.

At the interlocutor’s request, the President of National Assembly provided information on the current phase of the Nagorno Karabakh conflict settlement, also speaking about Armenian prisoners of war kept by Azerbaijan and the works being done to return them. Alen Simonyan has stressed that the Armenian side relies on the support of its all partners to ensure the release of prisoners of war as soon as possible.

At the end of the meeting, Alen Simonyan invited his counterpart to pay an official visit to the Republic of Armenia, ahead of the 30th anniversary of the establishment of diplomatic relations between the Armenia and Luxembourg, simultaneously adding that the opportunity of organizing joint events in the capitals of two countries at the parliamentary level could be discussed.